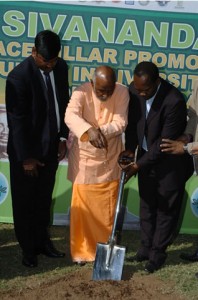 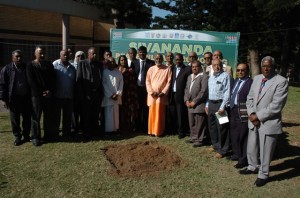 On Saturday, 4th June 2011 at the Clare Estate Crematorium, Durban , KwaZulu-Natal, His Holiness , The General Secretary of Divine Life Society, Worldwide, Sri Swami Padmanabhananda from Rishikesh ,India, together with the Mayor Elect of Ethekwini Municipality, Mayor James Nxumalo and Mr Ishwar Ramlutchman performed the Sod Turning Ceremony to install the Sivananda Peace Pillar. The Sivananda Peace Pillar, made from granite, 3,5metres high, weighing four tons, is inscribed with prayers from the world’s major religions. It will be mark the Clare Estate Crematoriums’ 105th year of existence. During the unveiling Ceremony, the Crematoruim will also be declared as a National Heritage Site. The Peace pillar would be a source of inspiration to the bereaved families that make use of the crematoriums’ facilities. While the family members wait for the sacred ash remains, they would be able to read the inscriptions on the pillar. The Pillar would also be dedicated to our forefathers who struggled hard during the past 150years. In Kwazulu-Natal, Peace Pillars have already been unveiled in Empangeni, Phoenix, Ladysmith, Pietermaritzburg, Greytown and Tongaat. Similar pillars will also be unveiled in Cape Town and Mpumalanga, while two more will make their way to Mauritius and Chennai, India, respectively. The Peace Pillar initiative was borne from a commitment made by Ramlutchman to “his beloved Swamiji”, the late Sri Swami Sahajananda, where he undertook to install eight “Sivananda Peace Pillar’s” across South Africa but has gone on to surpass the number promised. The Peace Pillars are erected in honour of Sri Swami Sivananda, founder of the Divine Life Society Worldwide and his disciple, Sri Swami Sahajananda. The peace project has the support of world leaders – including the World President of the Divine Life Society, His Holiness, Sri Swami Vimalananda; President Jacob Zuma; former President of RSA, Dr. Nelson Mandela, the late Dr M.V. Shembe (Leader of the Nazareth Baptist Church), current KZN Premier Zweli Mkhize; King Goodwill Zwelithini Ka-Bhekuzulu and His Holiness the Dalai Lama of Tibet, the Government of India, Chennai Municipal Corporation of Tamil Nadu and Maurituis have given their unconditional support and commitment towards the Peace Pillar Project and the awards.