at 08h30am to 11h30 hrs at the Durban Amphitheatre (opp. Elangeni Hotel, North Beach).  Strict Covid 19 Protocols will be followed. This year we envisage a large turnout of 2500 participants since the covid pandemic .

Previous years, International Yoga Day was celebrated the on a grand scale on June 21st in all the Provinces, KwaZulu Natal, Free State and Eastern Cape.  The main event will be held at the Durban Amphitheatre, North Beach.  This year we had ongoing yoga programmes in rural schools and at various religious institutions . For the first time we had a programme for peace and harmony at the Nelson Mandela Capture site this year as a build up to IDY 2022. This year we have partnered with the National department of Health to promote Health and Wellness through Yoga. As we celebrate this day, we strongly emphasize that we all should live in harmony and peace. Yoga is a medium in which we can achieve social cohesion, peace and harmony.

Yoga is essentially a discipline which also brings harmony in all walks of life, and thus is known for disease prevention, health promotion and management of many lifestyle–related disorders.  Yoga is a 5,000 year old physical, mental and spiritual practice speculated to date back to pre-Vedic Indian traditions, but most likely developed around the sixth and fifth centuries BC. Yoga gurus / teachers from India later introduced yoga to the West, following the success of Swami Vivekananda in the late 19th and early 20th century.

The objective of celebrating the International Day of Yoga is to create awareness about yoga and how it benefits everyone in better understanding the significance of traditional and authentic yoga techniques. At the initiative of the Hon’ble Prime Minister of India, a resolution to establish 21st June as “International Day of Yoga” was approved. In its resolution, the UNGA recognised that Yoga provided a holistic approach to health and well-being, and wider dissemination of the information on the benefits of practicing Yoga should be given for overall health of the world population. In his address at the UN General Assembly, Hon’ble Prime Minister of India, Mr.Narendra Modi said : “Yoga is an invaluable gift of India’s ancient tradition. It embodies unity of mind and body; thought and action; restraint and fulfilment; harmony between man and nature; a holistic approach to health and well-being”.  By changing our lifestyle and creating consciousness, Yoga can help us deal with climate change too.

It is wonderful that June 21 marks this momentous event in the history of humanity .Yoga is not

just about working out, it’s about a healthy lifestyle. The practice of yoga allows students to be

still in a world consumed with chaos. Peace and tranquility achieved through focused training

appeals to everyone. It is estimated that close to 200 million people around the world practice yoga (of some form or the other), a majority of them in lndia, and over 20 million of them in the United States alone.With this resolution for an lnternational Yoga Day, more people will become aware of the tenets of yoga and will be encouraged to follow a yogic life style, a life that is healthy, humble and devout. Let this be a great opening for the world community to realise the worth of oneness and then, there is no feud, no disagreement and no disparity. Man of every creed and colour will live as one – the world will become one.” Ishwar Ramlutchman 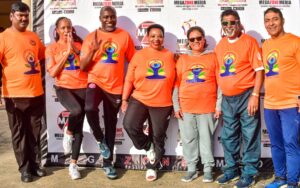 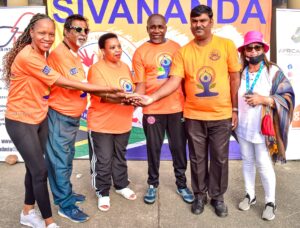 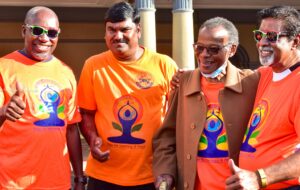