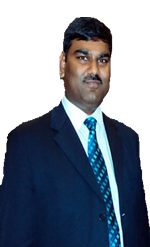 Ishwar Ramlutchman was born in Kwa-Dukuza, on 8th February 1976, he was the 3rd of 7 children.  His family was very poor and he could not afford Tertiary Education. He was forced to start work after matric to support his family.  In 1998 he was retrenched. He sought spiritual guidance from his Spiritual Master, the late Sri Swami Sahajananda. He was advised that ” he should do everything correctly and success would be his.” With no premises, transport or finances, his friends came to his rescue and allowed him to make AC Industrial a reality. AC Industrial was borne on 1st June 1998.  During this time he met his future wife Eswari. She stood by him patiently whilst his business took priority and was always there to motivate and inspire him. Mr. Ishwar honors and pays tribute to his staff for their collective hard work. He calls them the pillars of AC Industrial and credits them for the success of AC Industrial.

One of his priorities is to improve water and sanitation services to previously disadvantaged communities in consultation and collaboration with both the authorities and communities. He tries to focus more on rural areas to ensure that we do away with the situation where children and woman, in particular, need to walk long distances to dams and rivers to fetch water for their households.

He is eternally grateful to his Beloved Masters, Sri Swami Sivananda and Pujya Swami Sahajananda for all their guidance and inspiration. He would like to emulate the teachings of his Divine Master Sri Swami Sivananda, given by him in the following words:

“TO SEE GOD IN ALL NAMES AND FORMS.

TO SERVE THE POOR AND NEEDY, SEEING GOD IN THEM.

TO RELIEVE THE PAINS, SORROWS AND SUFFERINGS OF OTHERS.

TO BE A COSMIC FRIEND AND A COSMIC BENEFACTOR, A FRIEND OF THE POOR, THE FORLORN, THE HELPLESS AND THE FALLEN, IS MY CREED.”