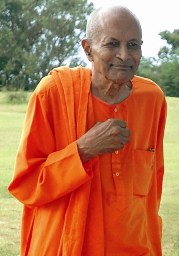 Sri Swami Sahajananda, Spiritual Head of Divine Life Society of South africa, was born in the KwaZulu-Natal town of Estcourt on 10 July, 1925. His pre-monastic name was V. Srinivasan. Although he had a promising academic career and was keenly interested in sports and games, the young teacher had a strong yearning to lead the spiritual life, as he found his mind tormented by turbulent thoughts. Coming to know that for success in such an endeavor a Guru was very necessary, he began to yearn for one.

One day, visiting a bookshop in Durban that dealt with Vedic literature, he happened to glance at a book entitled, Practice of Karma Yoga. Its author was none other than the great Sage of India, Sri Swami Sivananda.

Even though Srinivasan did not know the meaning of the words, “Karma Yoga” at that time, the book sent a strange thrill through him. Glancing through its pages, he instantly knew that he had found the Guru he was searching for. He was fascinated to discover that spiritual life can not only purify the mind but grant one God-realisation as well. Henceforth, God-realisation became the goal of his life.

He at once lost all interest in his academic career in which he was highly ambitious. He also lost interest in sports and games which he loved so much. He corresponded with the Master and began following his instructions. On his first visit to the Master in 1948, the only instruction received from the Master was “Learn to type and make Tea.” On his return to South Africa, he took up a post at the FOSA TB settlement, teaching at the school and serving the sick. In 1949, he received the Master’s instruction to start a branch in this country. In 1956, on his second visit to the Master, he was initiated into the holy order of Sannyas, with Swami Sahajananda being his monastic name.

One of the cornerstones of Swamiji’s spiritual life was his total obedience and dedication to the Master. On his return to South Africa, he continued the Master’s work at a vigorous pace. Dissemination of the Master’s spiritual literature was uppermost on his priority list. Swamiji worked tirelessly printing the Master’s books to the last days of his life, and was an expert editor, typesetter, printer, book binder, etc. He always ensured that the Master’s books were of the highest quality.

Alongside this, Swamiji began building projects for the underprivileged in the province. These projects included schools, clinics, children’s homes, creches, low cost housing, peace & skills training centres, etc. From 1974 until his Mahasamadhi on 2007, Swamiji completed over 300 such projects.

All the while, as such work continued, the Master’s Grace and guidance could be felt at every step. On the spiritual side, many devotees flocked to the Mission, engaging in spiritual practices and Sadhana outlined by the Master and Swamiji such as attending regular Satsangs, Meditation, Japa, etc. Karma Yoga formed and important part of Gurudev’s “Yoga of Synthesis”. Over the years, countless devotees engaged in selfless service, assisting Swamiji in various aspects of the work. The spectrum ranged from printing and working in the press to building, serving at the clinic, cleaning, cooking meals for the poor, etc.

To this effect, Swami Sahajananda worked tirelessly for 58 years serving his Master, and the people of South Africa. He attained Mahasamadhi on 10 December 2007 after a short illness. Thousands made the journey to Sivanandashram, Reservoir Hills, to pay their final respects to one who left such a deep impression on the lives of so many. Tributes poured in from all corners of the world.